or at least so it seems. And there’s a reason for that. But first something I was reminded about this morning that is vitally important to this train wreck of thought.

my best friend was going through a conundrum of the relationships variety. I gave her a long speech about finally giving the ‘nice guy’ a go and see how it works out.

Today, as I write this, it’s their wedding day. Yep, today I am her Dude of Honour at her wedding to the ‘nice guy’. Gives you a bit of an idea of where this post might be going.

But now, back to our regular scheduled programming.

Based on a Facebook link, and accompanying comment I made, my legions of adoring fans, yes all 3 of you, demanded I explain myself.

I shared this link. And my comment was ‘As a former nice guy I have to say this is lovely‘. And I was questioned about the ‘former’ bit of that comment. I’ve thought a lot about this over the years and by MY definition of a nice guy I am indeed a ‘former’ nice guy. This does not mean I’ve decided to go the ‘Asshole’ route. But more on that later.

The Mr. Sinister definition of a ‘nice guy’

You can imagine him. The ‘Nice guy’ is the one who would sacrifice almost anything to ensure that the lady of his affection is happy. This is the guy who will wake up at 3 in the morning and stop off to pick you up some ice cream on the way to come and console you all because you asked him to. He will go to the ends of the earth for his intendeds comfort and happiness.

He also never argues, just quietly accepting whatever it might be that you are doing and/or thinking. He does not criticize. He does not complain. His life is secondary to yours. And usually, he gets ‘friend zoned’ so hard the planet nearly gets knocked of its axis. He is the go to guy when the girl needs comfort and support. And unfortunately he also often becomes the door mat. So much a feature and dependable resource that he is just about forgotten or not considered even in day to day life.

Now let me give you a moment to enjoy the worms while I put this can opener away. Let me also grab this spoon and stir it up a bit more.

It was coming to this realization and all that comes with it where I started adding the ‘former’ to my nice guy status. You see the problem is as follows: Nice guys, when it comes to their lady of affection, wear their heart on their sleeves. They go all in and do everything in their power for this girl of their dreams. They do whatever they can to reach the goal of ‘Happily ever after’. Problem is that ‘Happily ever after’ is a two player game. And while the nice guy is throwing in game tokens at a rapid fire rate, the girl is still deciding which game she wants to play.

And there’s the rub. The nice guy is not giving the girl any motivation to add her own tokens. She’s not putting in any effort. She doesn’t have to. Now I could write volumes on this. Actually, there have been volumes written about this. 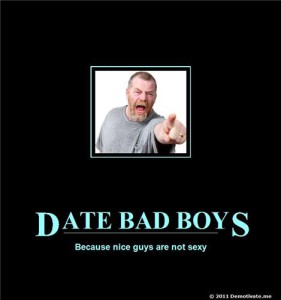 Personally, I’ve decided that if I am ever to expend the effort of being the nice guy again, the girl will have to deserve it. Which means she needs to be playing along.

See, in the great nice guy vs. asshole discussions people keep forgetting the majority of guys who don’t fit into either. Normal blokes. So when I say I’m a ‘former’ nice guy, I simply mean I’ve come to realize my own worth. I’ve not changed actually. I’ve become fussy and a bit stubborn in whether I should be putting in that much effort to be sure it’s not ignored or in vain. But I’ve not become the asshole. I think the massive swing from one side of the spectrum to the other is a bit much.

I also think it’s a bit like the news really. For every nice guy who’s heart is broken by a girl who’s heart is broken by an asshole there are probably a number of nice guys who got their girl. Whether the girl knew what his worth could be or whether he managed to be open with her, think the ‘I learned french for you’ speech from 10 Things I hate about you for example, a great number of nice guys do end up in happy relationships with their ladies of affection. 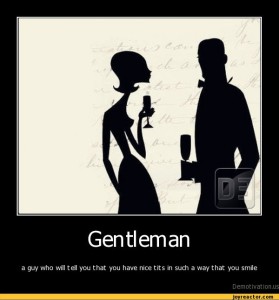 Be nice and be sexy.

Iconic One Theme | Powered by Wordpress